I had wanted to get out and play radio earlier this sunny Sunday, but as usual, other stuff got in the way 🙁

So it wasn’t until after lunchtime (Not that I’d had any food!) I had the opportunity to do the short drive to High Vinnalls, just outside of Ludlow.

Following others’ hints, I parked at SO47431 which as others have pointed out, does have a 2.1M height restriction, but being in my car, that didn’t bother me!

The car park was quite busy, since it was a nice afternoon. I packed my stuff and started along the path out of the top of the car park and along the slowly rising unmetalled road.

About 3-400 yards along, the road splits into two 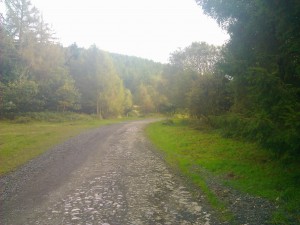 Just before the road splits in two.

If I had realised it at the time, there is a small short cut which veers off to the left.. I could have saved about a minute, and 50 yards of walking!

It can be seen directly ahead in this photo

What the heck, it was a nice day!

Just after you bear left at the junction, there is a path, to the right, that leads up the side of the hill. This is the way I went. 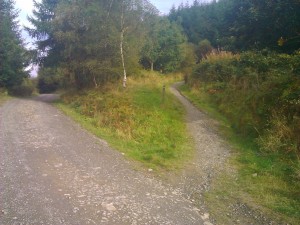 The path up the side of the hill

Now.. I realised it had been raining earlier in the week, but didn’t realise just how much!
There was a deep gully running down one side of the path, obviously from all the rain that had traveled down that way, and on the more level parts, it was incredibly muddy!

After about 500m slipping and sliding up the side of the hill, you manage to climb from around 270M ASL to 340M ASL and you end up at a junction with a wider track. 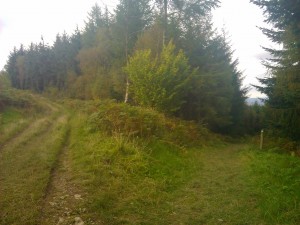 You double back on yourself at the top of the climb

You emerge from the trees at the top of the path on the right in this picture, and just about double back on yourself up the wider track, which leads up to the summit which is about another 250 yards ahead. 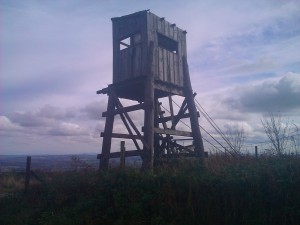 Wooden structure on top of the hill

(I really should get out more!)

Nice part is there are numerous wooden fence posts to tie poles too, and a nice seat with a view westwards. This is where I played radio.

Quite an enjoyable time, with a fair number of curious onlookers to keep amused!

Many thanks to the following for the contacts:

I was going to do a little HF, but having missed lunch I was getting hungry!

All in all, a very enjoyable walk, if a little muddy on the way up!

Apologies about the rubbish pics… I left the real camera in the car – Doh!