If at first you don’t succeed…….

My first attempt at activating  Brown Clee Hill was a total failure!. I blame Bradley Wiggins and his Tour de France win, which was the same Sunday.. The result was a whole 2 QSOs on 20M, and nothing at all on 2M..

So, it was time to try again 🙂

Saturday 18th August saw me jumping in the car for the short journey (for me anyway!) to the parking spot at SO585868. Actually I parked on the hill just above the phone box, maybe I should have parked at the gate, to take 50 yards or so off the walk 🙂 Grabbing the stuff, I set off up the lane and through the gate. 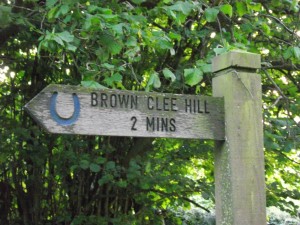 Only 2 minutes to Brown Clee Hill!

2 minutes to Brown Clee Hill!  Yay!
Remember, you’re not a horse!
Consequently, it’s going to take a tad more than 2 minutes to get up there.. Actually, I’m not sure a horse can get up there in 2 minutes, but who am I to doubt the sign maker?
It’s a bit of a slog really, most of the time in a dip between the hill and a grassy bank, lots of sheep, a lot of rubble, and quite a bit of animal poo…..  but nice views to the west towards Wales. But within about 15-20 minutes I was at the top of the ‘climb’ at the gate where you turn left and navigate your way across a bit of boggy terrain.. At least from here you can see the masts, and you can see where you’re going to!

Ambling up the gentle slope, I heard 2E0CHV/P calling from The Stiperstones. Unfortunately, at this point I wasn’t within the activation zone, so I left a reply until later.

By 16:20 I was ready, 4 sections if the fishing pole with the 2M SOTAbeam on top with the 817nd attached. I heard 2E0CHV/P calling again, and answered, giving me my first contact.

Closely followed by M0IBC in Rowley Regis who kindly spotted me on SOTAwatch. This resulted in a further 5 contacts, meaning I’d bettered the 2 from the last time!

All contacts on 2M FM, I did try 2M SSB, but failed to make any contacts whatsoever.. never mind.

I thought about doing some HF, but after getting the link dipole out and finding it was more tangled than a tangled thing from the planet tangled, I threw it back in the back pack and packed up!

It was a lot easier walking back down! A very nice afternoon in the sunshine really!

Umm…  second attempt to qualify this summit (First was sort of curtailed a couple of weeks ago when a load of horses decided to take a liking to my antenna…  I now know why the collective noun for horses is a ‘Harras’ 😉  Suffice to say I only managed one QSO that night!

Anyway, after fighting through what seemed busier than normal Bristol, I pulled into the car park at ST489581 with about another 5 cars, most of which seemed to have bike racks on, and was ready to go at about 18:50 GMT.

I followed the route I did last time, up across the road and up the path at the side of Ellick House, through the gate and taking the well defined way up SW towards the summit (ish) 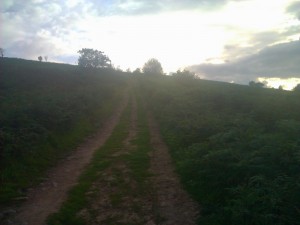 Up the path, straight into the sun!

Up the top of this section, the path takes a little swing to the south and up towards the Trig Point.

It appeared that there had been quite a bit of drainage work done at this point, and quite a lot of small rocks placed along the track, no doubt to see how many mountain bikers they could dislodge from their seats!

Just before I reached the Trig Point, about 25 minutes after setting off, I disappeared into the heather and gorse to find a small hollow beside a small tree, hoping to avoid any further horse related incidents.

I had my fishing pole fastened to a small tree, and the sota beam in the air. I had a quick check on sotawatch, but couldn’t see any potential S2S activity, so I spotted myself and gave out a CQ

It all seemed pretty dead, I could hear a few fairly distant, mainly mobile, stations, but couldn’t work them, and eventually ended up with martin, M0HCT, from Nailsea.. Very spooky!  Only one letter out from my callsign! 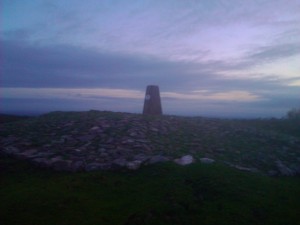 Rubbish pic of the trig point in the gathering gloom!

Quickly followed by Paul, M0PRJ, from Kingswood, and a few others, including Keith, G6LLX/P who was on May Hill G/WB-019, but not doing any SOTA activation, Since I have no idea if he was within the activation zone, I can’t really claim it as a S2S.

Finishing off with M6KBC in Bath as the sun went down, with 6 QSOs, all on 2M FM, that was it.. I packed up and had a wander up to the trig point. Just to say I’d been there (again!) before making my way back down, being almost dark by the time I got back to the car.

So, second time lucky for this one.

I’ve been working down in Bristol for a while and wanted to do some radio ‘stuff’ but… It’s just been too damn wet!

Apart from the 17th July, which seemed like it’s the first day for weeks that it hadn’t rained. So, armed with my FT817ND, recently made (but untested) link dipole, fishing pole and very necessary groundsheet(!), off I went to Dundry Down (G/SC-010) after work.

Bristol being Bristol was a pain to drive through, but the satnav eventually brought me within a few feet of the car park recommended by Richard on SOTAwatch, and off I went through the field full of cows..!

Far from being a tip, I think this route was quite pleasant, even if some large puddles and a *lot* of cow pats needed to be navigated around! Quite easy for someone as unfit as me….

So, fishing pole was erected and link dipole setup, but for some reason SWR was found to be way out on 40M, and since I only cut it for 40, 20 and 10, that probably left only 20 to use. 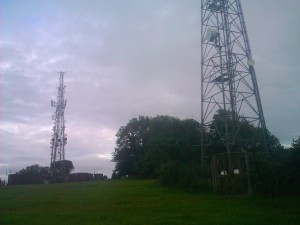 No competition from these then…

Having a look on SOTAwatch spots, I noticed Hans Christian ( LA1EBA/P) on some unpronounceable 😉 summit (LA/RL-061) in Norway. He was coming through about 4/7 but I just couldn’t get in due to a long winded QSO he was in with someone in Holland I think.

Anyway, I spotted myself on SOTAwatch and was on air around 18:35z Quickly followed by a couple of contacts in Slovakia and Denmark.

Then tried getting back to LA1EBA/P who could just about hear me, but he was soon lost in the noise, unfortunately. maybe another day!

Followed by a QSO with Andy in Falkirk who very kindly put out another spot for my one remaining QSO, which was picked up by Tony in Manchester, followed closely by Sara, his XYL.

Graeme in Glasgow followed, as did 4 walkers who asked me to send their regards to Glasgow 😉 And the evening finished off with Michael from near Lake Constance in Germany.

Just before packing up, I thought I’d investigate the antenna, only to find that it was working perfectly on 40m.. Probably something to do with the ends being about a foot off the ground… oh well, never mind!

Altogether quite a successful first HF activation. There was quite a few stations heard on 2M FM, but the interference from the transmitters was quite bad at times, so in true ‘give up’ style, I didn’t bother 🙂