Only a couple of days left before I leave the southern hemisphere 🙁 so it was time for a couple of easy vk activations!
Both virtually drive on summits, so that was nice  first one, just off the Hume Highway between Sydney and Melbourne, vk2/il-001, Mount Gibraltar, I drove past the gate to the many transmitting towers, so I did have to walk up to the activation zone. I was stopped by a couple of tourists who wanted to know where the viewpoint was.. they said they thought I would know as i looked like a “professional walker” ( Huh?. They’d obviously been out in the sun too long! Damned tourists…. oh.. yes… err… 😉 )
Anyway, there appeared to be a lot of work happening on one of the towers, installing another dish, so i kept out of the way, finding an old tree to bungy the pole to, one end of the linked dipole in a tree, the other wrapped around a rock on the ground. 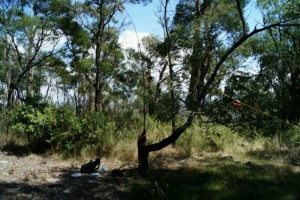 pole bungied to the tree, rig on the ground being investigated by ants 🙁

The RF noise from the transmitters made things a little difficult in hearing chasers, my reports to most being significantly worse than the reports i received in return, however, all QSOs were successful in the end, 10 on 40m, and a further 6 on 20m.

It was quite ple:)asant, in the shade of the trees, the thermometer showing 32c, a nice change from 32f 🙂

Quite an enjoyable time in the shadows of the trees,many thanks to all the chasers.
Rig was the 817nd, with the MP-817 Amplifier,into a linked dipole, not too far off the ground.
After close to an hour playing radio, it was time to pack up, and make my way down the Hume Highway again to Canberra