I was going to get up early.. but decided, looking out at the weather, I’d go back to bed for a little while

I’d had the Tracer Battery on charge overnight, even though it was only about 1/3 used..

After breakfast, a final check I had everything, I jumped in the car, driving towards the middle of Funchal, to find the road up through Monte, on the way to CT3/MI-004.
Lots of windy roads, hairpin bends, all good fun (at least with not much traffic about!) The higher I got, the more the amount of water running down the sides of the road told me it wasn’t going to be a very dry day!

Soon I came to the junction, signposted to Pico do Areiro, and turned off, held up for a few moments by some workmen doing some logging work. Around half the way along the road, the clouds rolled in, visibility dropped to about 15m, and the ICE warning lit up on the dashboard!The thermometer showing 3C…
Eventually reaching the top, I missed the car park sign in the mist and ended up having to drive around the roundabout at the end, and back down to the car park.
Being such a nice day (not!), I think there were 4 cars in the car park! I parked close to the bottom, in order to do at least some walking up the hill!

Up the steps, past the cafe building it was impossible to even see the radar dome! I had a quick wander about, up the wheelchair ramp, up the steps to the ‘trig’, looking for somewhere suitable for the ‘shack’

There is a radar dome there… somewhere!
Since it wasn’t too busy (I probably saw less than 25 people all the time I was there) I bungied the pole to the fence post mid way up the steps, by a nice ‘seat’, which was rather nice!
Again, I unravelled the linked dipole to somewhere between the 20m and 40m links, and wrapped the ends around the fence top. I decided to use the amp from the start, so cabled it all up.

The ‘shack’ looking like it’s at the end of the world!
Close to 12:30, I spotted myself on 21Mhz, and within 20 minutes, had 18 QSOs in the log.
However, there appeared to be a problem.. The amplifier appeared to be intermittently powering off and back on again, a bit of further investigation showed that the 817 was intermittently using the internal batteries. It looked like an issue with the Tracer battery…
I had a similar issue with one on G/WB-004 last year which I’d put down to the cold.. being rather chilly here, it could be the same, I put it in the back pack, and it appeared to solve the problem.
Dropping down to 14MHz I recorded a further 17 QSOs in the next 20 minutes.
Going to 28MHz, I then recorded 50 QSOs in just over an hour, including a s2s with 9H3BT/P on 9h/ma-001, which was a nice surprise! 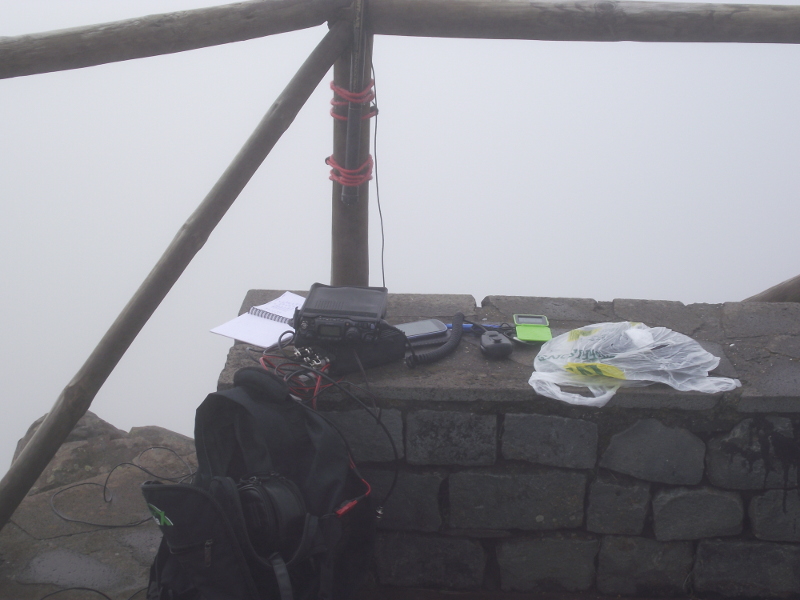 However, the battery problem appeared to have returned, meaning that I was sometimes running close to 50W, then dropping to 2.5W on internal 817 battery, then back up again.. Not ideal.
A bit of wiggling about with cables, seemed to have made things a little better, so I went to 21MHz and tried again..
A s2s with SP8RHP/P on sp/bw-003 ensued, followed by another 3 QSOs.. Finally going to 24MHz for a further 6 QSOs before taking a few pics, and packing up, once calls were being unanswered.

View up to the highest point.

The path ‘PR1’, apparently to nowhere!

Thanks, once again to anyone who called in, and apologies if I missed anyone!

Getting back onto the main road, I managed to miss a load of very deep potholes… except one…
Convinced that I’d probably blown the tyre, or at least bent the rim, I stopped and had a look.. I couldn’t see any damage, and thought I’d got away with it…
However, in the middle of what passes for ‘rush hour’ in Funchal, some nice YLs, whilst stopped at traffic lights began to attract my attention (no, not in THAT way…) and pointing to the front of the car.. yes… tyre was just about flat.. typical..
No problem.. I called the ‘helpline’ as instructed, to be told that they didn’t do punctures, despite what I’d been told, however, they would come out for around 100 euros.. umm… no..
Having replaced numerous wheels in my time, I’m more than capable of doing so, but didn’t relish the prospect of doing so in some narrow back street, on the wrong side of the road.. The nice people at Avis, sent one of their guys out, who did it instead

Only downside, was, since there was a small tear in the sidewall, it wasn’t repairable, and hence, I ‘lost’ the 100 euro excess… ah well, At least Filipe called me, and apologised for the attitude of the third party ‘helpline’

So, all in all, 2 days of good fun, gamboling around somewhat scary roads, 2 SOTA summits activated, if a little expensively!
Next time… can someone remind me to actually take my floppy brimmed hat with me to a summit please? Sunburnt ears apparently cause quite a bit of hilarity!